WebDAV: download of files with Umlauts or special characters in name fails with "405 Method Not Allowed"

I am running Nuxeo 8.10 in a Docker container and use Transmit to connect to it via WebDAV. My host system is Mac OS X.

Previously I had uploaded all my local files to Nuxeo via WebDAV, no problem.

Now I want to download them all back to my local system from Nuxeo.

This works for files with common file names but fails for all files that have special characters or German Umlauts (ä,ö,ü, etc.) in it, even though uploading them to Nuxeo worked fine and the characters are also allowed on Mac OS X file system.

This is an excerpt of the files that failed to download: 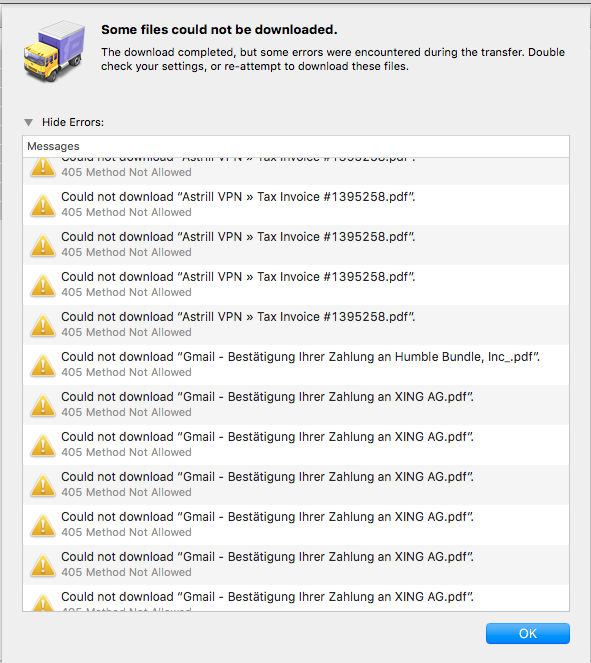 What's also interesting - these files with special characters get indexed in Nuxeo/ElasticSearch just fine, but the link to open the detail view from the search results page fails. 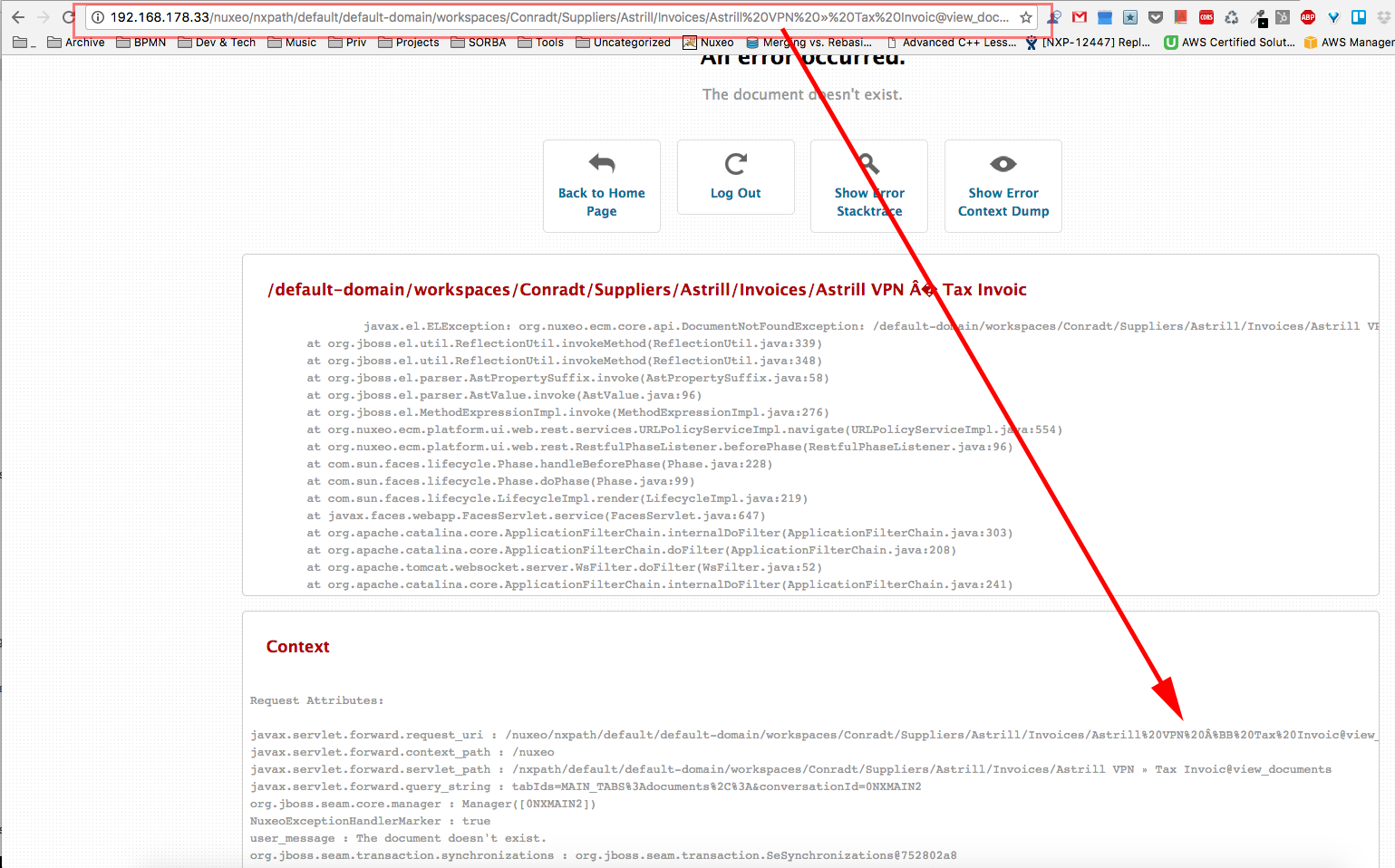 In my Docker container, the url is:

I exported the document and attached the file to this post (document.xml). When looking at the xml, you see the following information:

I noticed that the URL that point to the document details page differs between the Search autocompletion list and the JSF explorer browser. One is using the path, the other is using the node id.

The same happens for the new web UI as well. 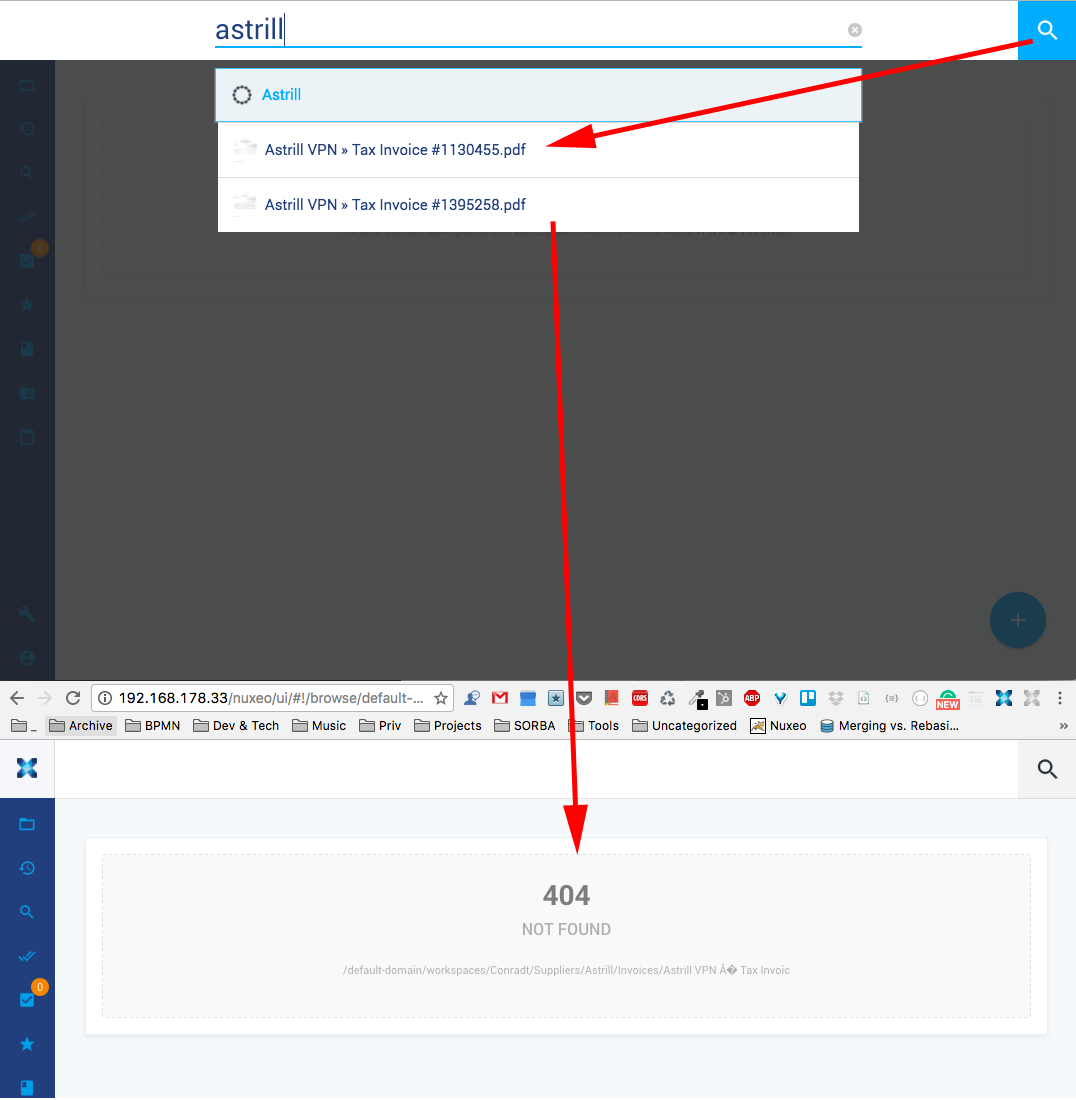 The Umlauts in the file names get changed.

If I want to delete the files from Nuxeo again via WebDAV client, it fails: 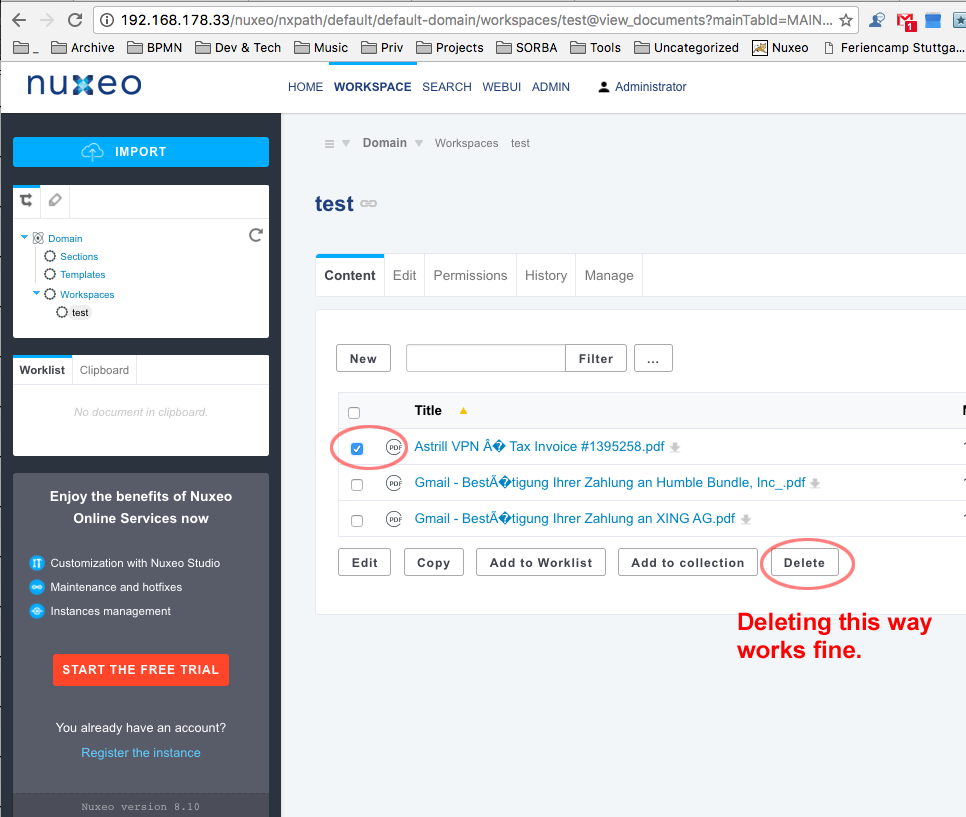 Another test: I created a file with Umlauts in JSF web ui (Umlauts remain correct), then try to download it via WebDAV client. Getting 405 error as reported in my original posting above. 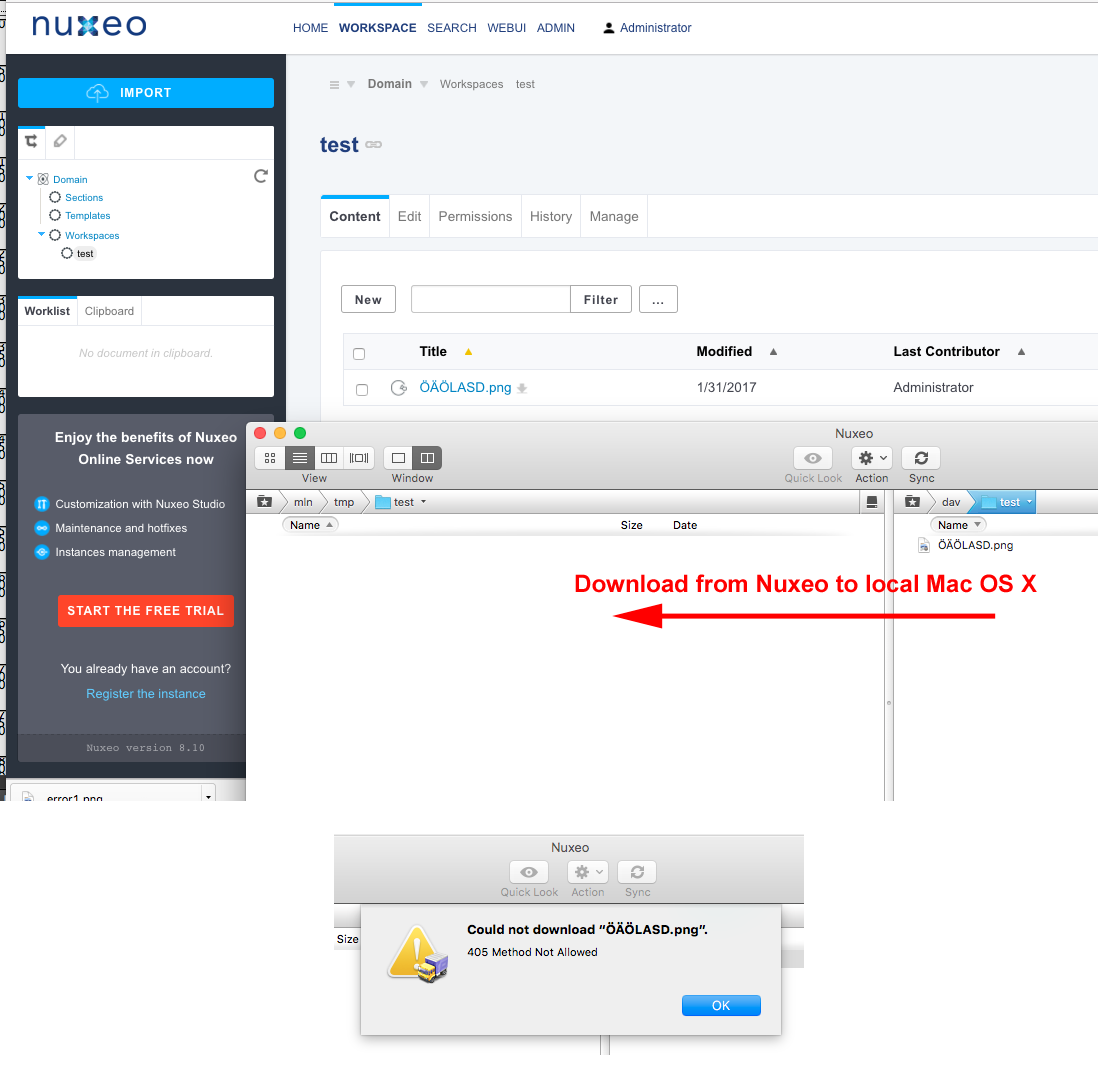 btw: Meanwhile I switched from using WebDAV to Nuxeo Drive, this works without problems regarding Umlauts and special characters.

FILES:   Screen Shot 2017-01-31 at 13.12.40.png   webdav2.png   umlauts-download.png   webdav1.png   opening-details.png   document.xml   new-web-ui.png   explorer-umlauts2.png   explorer-umlauts1.png   Screen Shot 2017-01-30 at 18.09.32.png
0 votes
0 answers
3263 views
Copy URL
Florent Guillaume
Please note that Nuxeo 8.1 is obsolete and unsupported, even for this site. You'd do yourself a service by upgrading to 8.10.
01/31/2017
Mathias Conradt
Sure, I will do that. (I didn't pay much attention when using the official Docker image, thought it would be pretty up to date.)
01/31/2017
Mathias Conradt
Florent Guillaume I switched to 8.10, but the problem remains (I think I was actually always on 8.10, just misread the version accidentially yesterday). I updated the post above accordingly regarding the used version.
01/31/2017
Florent Guillaume
Ok thanks for the detailed report we'll check what happens with character encoding from WebDAV. It's possible that there are different interpretations of character encoding depending on the clients. The Finder of macOS is also known for having weird internal encodings of accented characters using unicode combining accents.
01/31/2017
Mathias Conradt
Florent Guillaume I removed the answer and updated the original post, sorry about that. Regarding the WebDAV clients: I think it's a repository issue. I tested Nuxeo with the NetDrive WebDAV client (http://www.netdrive.net/) on Windows and the same problem occurs. I then tried to use the the Transmit WebDAV client (https://panic.com/transmit/) on Mac OS X (the one that fails for Nuxeo) but to connect to a standalone Jackrabbit Oak (https://jackrabbit.apache.org/oak/) repository that I have, there the Umlauts or special characters are no problem (uploading and downloading), therefore I think it's not an issue of the WebDAV client. I also tested with the Transmit client and an Alfresco (https://www.alfresco.com/) repository, also no problems there.
01/31/2017
Follow
Tags
nuxeo-platform 8.10 encoding charset umlauts
Linked Questions
Select an existing question
Related Questions
Update package via Studio fails: UpdateManager.java looks for wrong themes-path
JSF explorer cache issue in combination with WebDAV: files in folder not shown in JSF explorer
Problems with Facets: schema property values of document not being saved
How to customize the properties in the thumbnail view?
Uncaught TypeError: jQuery(...).preventDoubleSubmission is not a function(anonymous function) when Quota & Statistics is activated
What types of documents should not be visible through WebDAV and why?
Is there a way to replace the suggester in default search boxes?
Resizing the width of the Video Player
How can I create a new 'Main menu button' and a new 'home page' for it?